The City’s awful rezoning approved on May 27, 2021 was not necessary to bring in a climate solutions center, but the not legally required climate center concept was necessary to sell the high rise, high density largely commercial rezoning to the public.
Groups, Officials, and Artist Signees to the Community sign-on Statement
“Did You Know?” – Fact Sheet For Developers
5-30-21 Press Release: Governors Island, the facts – City Council lets NYC down – Chin and and Rosenthal dismiss the public

Before and After gallery 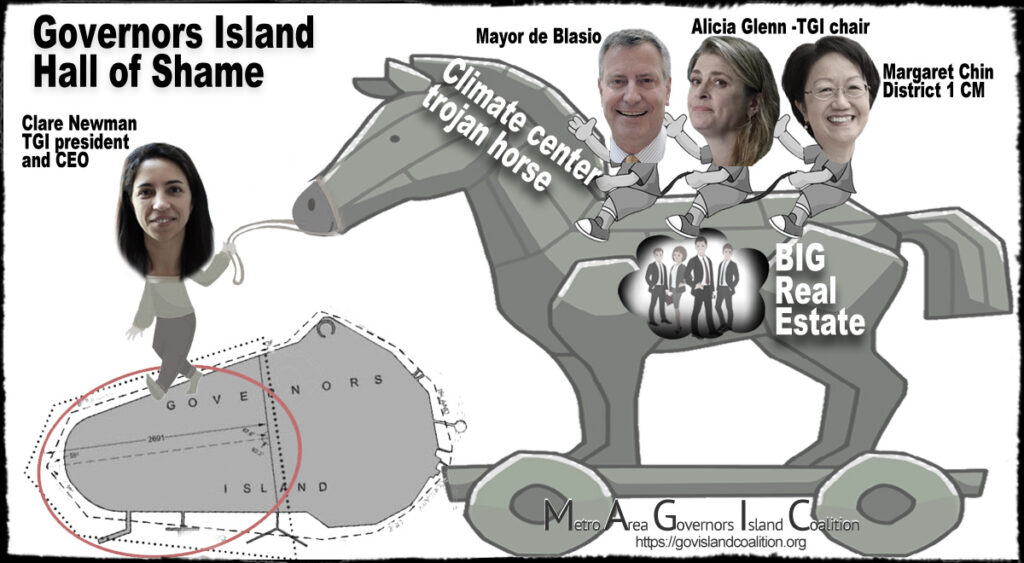 M.A.G.I.C. op-ed: With ‘Friends’ Like That … Friends of Governors Island’s Misguided Plan

a M.A.G.I.C. plan for the Governors Island “development zones”! 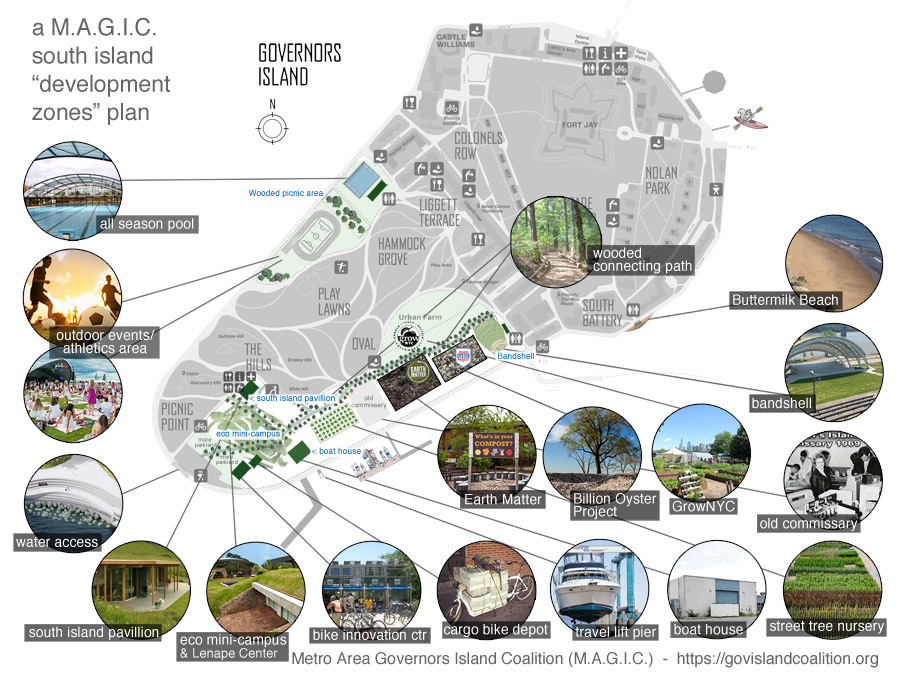 You can say that again! – Particularly worthwhile public comments and testimonies. 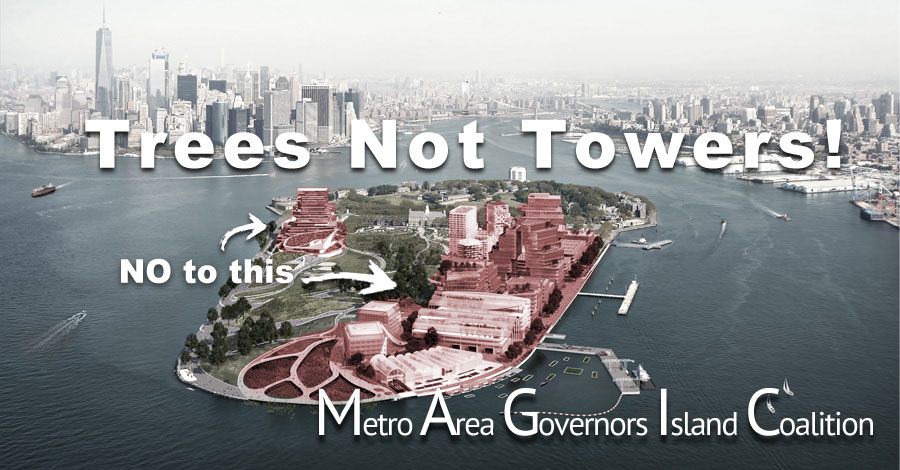 NOTE:  While this is the pre May 27, 2021 zoning approval overview, the information still applies.

Under the recently approved Governors Island rezoning, an incredibly unique green urban refuge in NYC will essentially become a backyard for a massive corporate-style facility being marketed as a climate change research center – fundamentally altering the psychological experience of the island.

In reality, the Governors Island (GI) climate hub proposed by Mayor de Blasio and the Trust for Governors Island (TGI) is part of a fast track push for numerous NYC rezonings (including Flushing, SoHo/NoHo, Gowanus) to satisfy the mayor’s economic recovery plan legacy. It’s a Trojan horse for high-rise1 profit-driven overdevelopment (“destination shopping and offer special and department stores, theaters and other commercial and office uses” 2).

The project’s law firm has ties to the powerful REBNY real estate lobby. The TGI chair citing “the hopeful case of Robert Moses“ 3 and saying, “This is a nice piece of real estate” 4 should also be red flags.

1) The main rationale for this intrusive project – financial self-sufficiency for GI – is not justified. This upzoning won’t pay for the Islands needs – at least not until 2050 according to the Trust for Governors Island’s (TGI) own speculative projections. It would be infinitely more economical to by-pass developers and subsidize Governors Island directly. Community Board 1 (CB1) says the Trust’s financial analysis is insufficient. A City Planning commissioner said approval would be akin to the city giving the Trust a blank check for an unspecified project

2) The rezoning “encompassing the entirety of Governors Island” 6 subjects the vast parkland to future encroachment from the currently designated areas. (“… pursues land use changes that will permanently allow new development.” 7) The proposed blanket C4-1 zoning potentially subjects all areas in the south island to eventual development.

3) Any discussion regarding a climate research center here is irrelevant. This is a proposal to upzone the south island, period. There’s nothing legally requiring a climate center tenant and an educational institution lease would only be for 30 years. In fact Governors Island is already productive as a climate hub, thanks to the work of Earth Matter, GrowNYC, Billion Oyster Project, the Harbor School, NYC Audubon, Waterfront Alliance and others.

4) “Open space” is not just pedestrian access, as TGI is selling it, but involves sky and the feeling of openness. The “increased open space” that TGI is presenting is “woven open space similar to Battery Park City.” 8 It’s boxed in by 10 – 30 story buildings and non-public areas. New building on Governors Island should be kept to minimum and not exceed the four story height of buildings in the historic district or the 35-foot height limit in the current zoning.

There is a serious need of New Yorkers at this moment for solace and the last thing that many can afford right now is a vacation. 99% of New York City zip codes use Governors Island which offers what other major NYC public spaces can’t – a retreat, an adventure, a change of scenery, and escape from the glass and steel towers. This fight is about the need for tranquility, for solace, and sanctuary, and for the preservation of natural habitat and beauty. 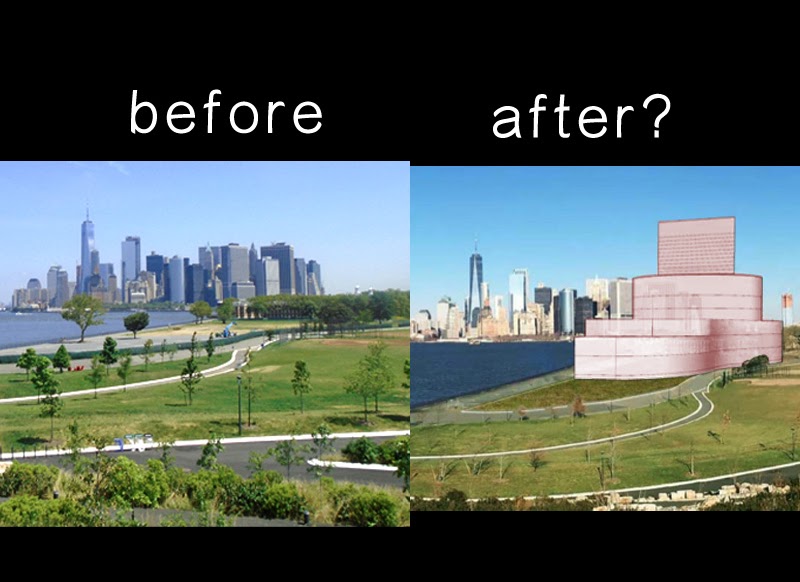 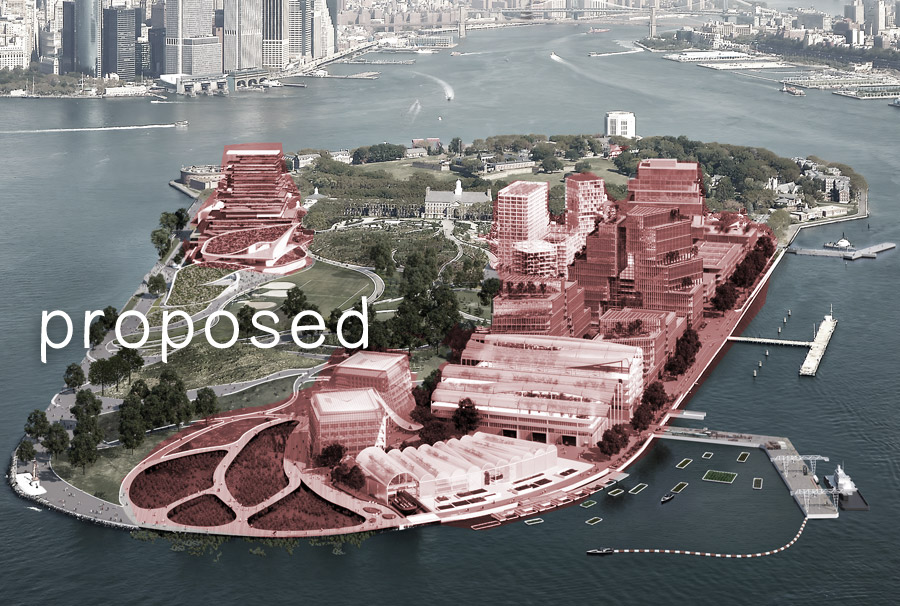