An excellent Amicus Brief supporting the Article 78 Lawsuit against the 2021 Governors Island rezoning put together by John Low-Beer for the City Club of New York was filed July 25th, 2022.

When the federal government transferred Governors Island to the State and subsequently to the City of New York, it imposed deed restrictions “to ensure the protection and preservation of the natural, cultural and historic qualities of Governors Island, guarantee public access to this magnificent island, promote the quality of public education, and enhance the ability of the public to enjoy Governors Island and the surrounding waterways, thereby increasing the quality of life in the surrounding community, the City, the State and the United States,” and to make the Island “an educational and civic resource of special historic character and as a recreational and open space resource.”

[…] where the Trust, a City entity, has assumed ownership of Governors Island, and where all the respondent City entities have concededly accepted the accompanying Deed restrictions and obligations, it is arbitrary and capricious for those same entities to turn around and adopt zoning that, while it may further laudable City economic development objectives, negates those same Deed restrictions. Yet that is what has happened here.

[…] In their [The City’s] telling, the Deed prioritizes “maximizing”—not merely “guaranteeing”—public access to the Island, […] Therefore, they argue, to the extent that the Deed’s first-stated goal of “protection of the natural, cultural and historic qualities of Governors Island” conflicts with these economic development goals, the former must give way.

[…] goals, which Respondents claim are primary, are nowhere to be found in the Deed, much less prioritized over the Deed’s primary goal of protecting and preserving this unique environment of “vast water, big sky,” and “views of the harbor … from all around the edge of the island and from its interior.” […] No matter how worthy the City’s economic development goals may be, it cannot achieve them by an arbitrary and capricious repudiation of its legal obligations.

Petitioners contend that the City’s upzoning of parts of Governors Island to allow for large-scale commercial and manufacturing uses and high rise buildings is contrary to covenants that run with the land in the Deed from the federal government, and is therefore arbitrary and capricious. In response, the City Respondents make three arguments: first, that Petitioners lack standing to enforce the Deed; second, that Petitioners’ argument is based on the “mistaken premise that local zoning provisions are arbitrary unless they mirror the broad use requirements and restrictions included in the deed”; and third that the upzoning is consistent with the Deed restrictions. All three lack merit.

A. Petitioners Seek to Invalidate the Council’s Actions as Arbitrary and Capricious, Not to Seek Enforcement of the Deed Covenants Against the Trust
Petitioners do not seek to enforce the Deed covenants. Rather, they argue that when the City Respondents took ownership and control of Governors Island, it bound itself to those restrictions, and its enactment of zoning that allows as-of-right construction and uses in blatant violation of them is arbitrary and capricious. […]

[Footnote] It is especially arbitrary and capricious because, as explained below, the City’s rezoning appears motivated at least in part by City-wide economic development concerns that, although laudable, are extraneous to the Deed and the carefully developed Governors Island Park and Public Space Master Plan (2010) (“Governors Island Master Plan”), (Resp. Exh. 47), and concededly may not be necessary to achieve the Plan’s objectives. Cf. Municipal Art Society v. City of New York, 137 Misc. 2d 832, 838 (S. Ct. N.Y. Co. 1987) (“Zoning benefits are not cash items.”).

C. The New Zoning Violates the Spirit and the Letter of the Deed Restrictions
Respondents’ half-hearted argument that their upzoning is consistent with the Deed restrictions does not withstand scrutiny. The new zoning violates both the goals and the specific restrictions of the Deed.

“Your visit to Governors Island culminates at the top of the Hills where you take in breathtaking 360° views of the New York Harbor. … In Manhattan, tall buildings create canyons with their own shadows. There is little sense that Manhattan is an island surrounded by water. … The Hills offer a more dramatic 360o panorama of the Harbor. As you make your way up one of four hills, the Island’s open spaces and buildings fall away, and the Harbor and skyline reveal themselves. While just 82 feet high above grade, the tallest hill affords views previously only experienced from a plane or helicopter. The panorama of the Harbor, with the sea, sky and monuments unfolding, gives you the sensation of being at the top of the world.”

Under the rezoning, the culminating experience of this 360o panorama is no more. The blocking of this view by buildings is shown in the below 3D model prepared by the Environmental Simulation Center and George M. Janes & Associates, consultants to Community Board 1. This image shows the view from the Open Space Subarea and the Hills looking northeast. The 2021 zoning allows buildings 225 feet high—equivalent to 22 stories, plus a 40-foot allowance for permitted rooftop obstructions. ZR 134-24(b). This is three times the height of the highest hill on Governors Island. 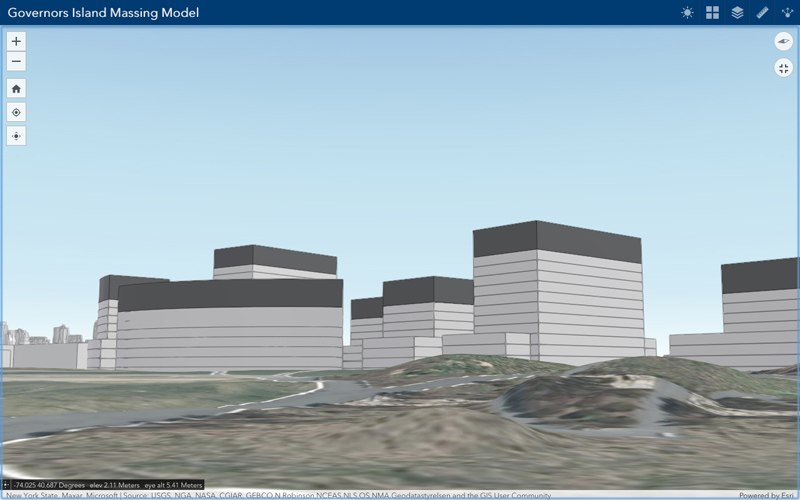 Under the rezoning, too, the maximum permitted floor area ratio (FAR) on the two Development Zones rises from 0.5 to 2.63. ZR 134-212; FSSGEIS, Executive Summary at S-3 (comparing 2013 plan with rezoning). This more than five-fold increase in bulk and density violates the Deed restrictions. With its out-of-scale tall buildings and density, this rezoning negates the Deed’s goal of “preserv[ing] and enhance[ing] these views [of the harbor], from all around the edge of the island and from its interior,” and particularly from the interior open space of the South Island and Outlook Hill.
[…]
Nothing in the record suggests that maximizing public access and creating an
educational and cultural hub were primary, or that the federal government even had the goal of maximizing public access or creating an educational and cultural hub. To the contrary, the Deed states that the first goal is “to ensure the protection and preservation of the natural, cultural and historic qualities of Governors Island.” The other goals are, in order, to “guarantee public access to this magnificent island, promote the quality of public education, and enhance the ability of the public to enjoy Governors Island and the surrounding waterways, thereby increasing the quality of life in the surrounding community, the City, the State and the United States.” Deed ¶ 2.1. The Deed speaks of “guarantee[ing],” not maximizing, public access, and of “promoting the quality of public education,” not creating an “educational and cultural hub.”

2. The Rezoning Violates the Deed’s Requirement That at Least 40 Acres Be Dedicated as Public Parkland, and Also Violates the Public Trust Doctrine. The Deed requires the creation of “public parkland of at least forty (40) acres …which shall be dedicated and used as such in perpetuity,” Deed ¶ 2.3(a)(i).

[…] the approved zoning allows these areas—the “Open Space Subareas”— to be built on and used in ways that violate not only the Deed, but also the public trust doctrine. The new zoning states outright that permitted uses in the Open Space Subareas may include not only “public parks,” but also “private parks,” without limitation. […]

The rezoning also allows “buildings or other structures containing permitted uses, up to a height of … 25 feet,” occupying as much as 20 percent of the Open Space Subarea. ZR 134-24(b)(5). While the public trust doctrine allows structures serving park purposes, two- plus story structures covering 20 percent of the park’s area cannot be said to serve park purposes. The zoning further allows cellars underneath the entirety of the Open Space Subarea, which can be used for any “use otherwise permitted in the Southern Subdistrict.” ZR 134- 112(a). Such uses include large-scale commercial and manufacturing uses, as discussed below.

These provisions are contrary to the Deed’s requirement that these areas be dedicated as public parks, and also violate the public trust doctrine.

This too is a clear violation of the Deed restriction. […]

In reality, it appears that the City is primarily interested in facilitating development to help the City’s economy, regardless of what the Deed restrictions require. In 2020, the Office of the Mayor “announced that the [Governors Island] Center for Climate Solutions would play a key role in the Mayor’s economic recovery agenda, StrongerNYC. The Center for Climate Solutions is projected to create 8,000 direct new jobs and $1 billion in economic impact for New York City.” […] These are laudable goals. But what the Court of Appeals said in Avella is equally applicable here:

We acknowledge that the remediation of Willets Point is a laudable goal. Defendants and various amici dedicate substantial portions of their briefs to the propositions that the Willets West development would immensely benefit the people of New York City, by transforming the area into a new, vibrant community, and that the present plan might be the only means to accomplish that transformation. Those contentions, however, have no place in our consideration of whether the legislature granted authorization for the development of Willets West on land held in the public trust.

Avella, 29 N.Y.3d at 440. Just so here, no matter how laudable the City’s goals, they cannot override the covenants in the Deed.

For the foregoing reasons, this Court should grant the Petition or the First Amended Petition.

[…] Amicus only adds pictures copied from the FSSGEIS that show before and after comparisons. These pictures, attached as Exhibit 1, illustrate the Manhattanization of Governors Island, and the destruction of its unique qualities, that will ensue if the challenged zoning is enacted.

(A few of the comparison images follow. See the PDF for more.) 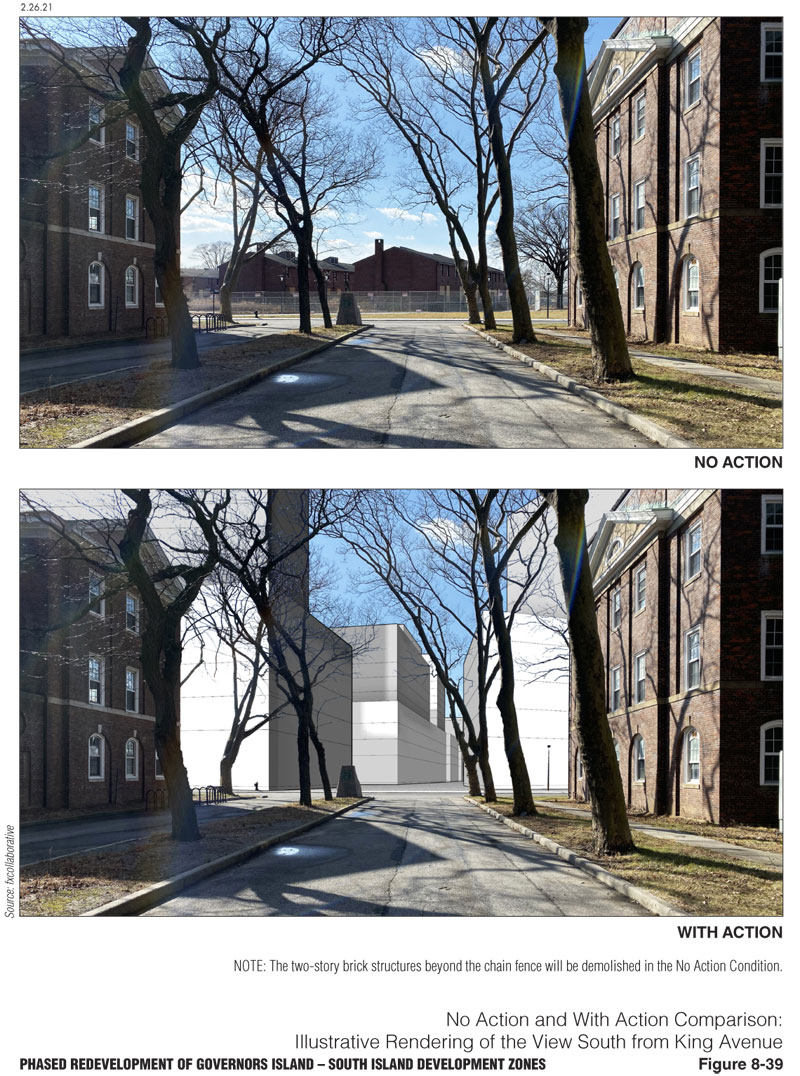 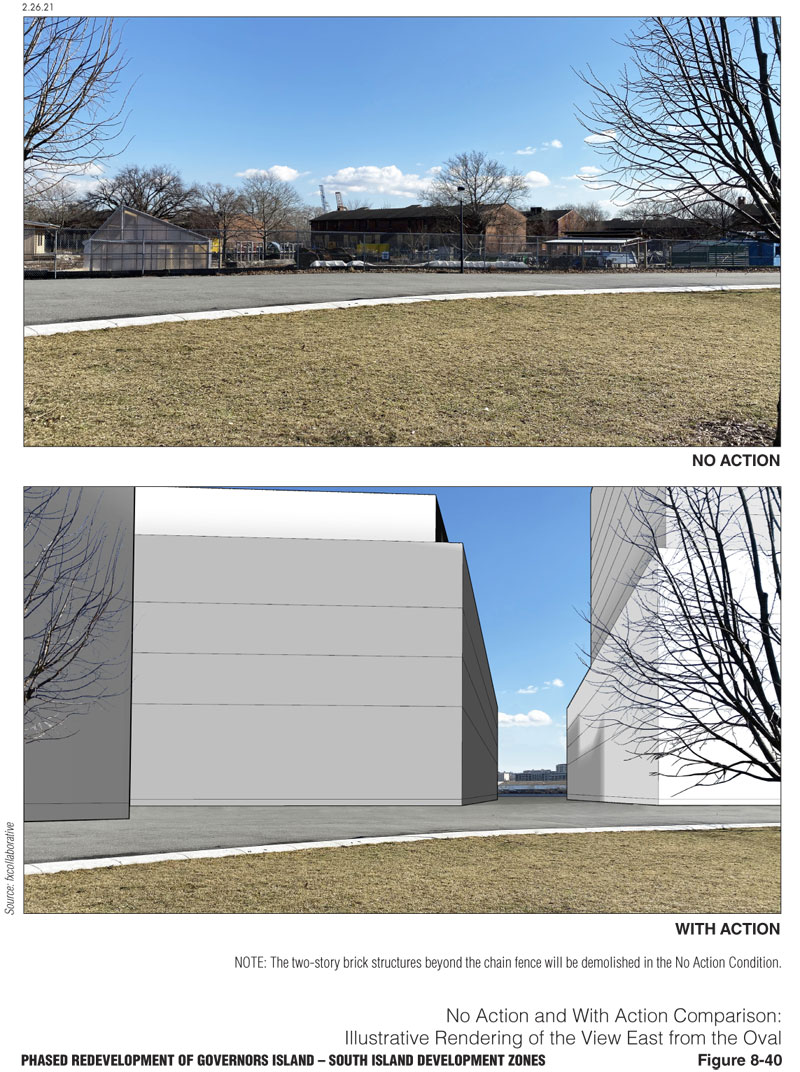 See the PDF for more images.