Below is some of the written testimony presented to The NYC Landmarks Preservation Commission (LPC) prior to their Tuesday, October 11, 2022  hearing regarding Trust For Governors Island’s (TGI) proposal for new outdoor lighting for Governors Island (GI). The TGI proposal includes completely out-of-character intimidating 35ft light poles with obtrusive overly bright lighting for the historic district.

HDC finds the proposed lighting solution to be inappropriate within the Nolan Park and Colonels Row portions of the project. To be specific, we find the telephone poles to be out of scale and character with the Nolan Park and Colonels Row areas and we find the notion of the so-called moon lighting in these areas to be extremely out of character. We therefore ask the commission to require the applicant to find a more modestly scaled solution to path lighting within the two listed areas.

On behalf of the Preservation League of New York State, I am submitting the following comments regarding the application to install new lighting in the Governors Island Historic District.

I have reviewed the information submitted by the Trust for Governors Island on September 8, 2022, which included photographs of the mock-ups of the proposed light poles, and watched the recording of the lighting designers’ presentation to the Manhattan Community Board 1 Landmarks & Preservation Committee on September 8. The utility-pole-style wood poles depicted in photographs on pages 12, 13, and 14 may be an acceptable solution for some parts of Governors Island, but are incompatible in size and material with the character of historic light fixtures and with the surrounding architecture in
historically residential, pedestrian-oriented areas of the district. Poles of this style, now and historically, are typically associated with telephone and other wires, not with light fixtures in pedestrian areas as is proposed here.

As you know, historic districts are made up not only of buildings, but also of landscape and streetscape features that contribute to the cohesive nature of the district, and major alterations to the streetscape can be as detrimental to historic character as major alterations to the buildings. While I appreciate the need to unify and upgrade the lighting system in preparation for new tenants, it seems that the necessary system and safety upgrades could be achieved using fixtures that are less intrusive and more compatible with the existing
district, particularly in pedestrian-oriented areas.

From: Wendy Brawer, 30 year Lower East Side resident, and eco designer since 1995

There was a hearing regarding development on Governors Island in the ferry building a few years back. I was one of the few people who spoke for wildlife and how important it is that we consider the island from a habitat perspective.  Our city is on the Atlantic Flyway and the island is a migrating bird stopover.  Thankfully, some of the post-Sandy work has increased the biodiversity of the island, and for New Yorkers, it has become a treasured place to watch birds and bees.

Nearly 3 billion birds have disappeared across North America since 1970 — a 29% decline. Don’t make things worse with a poor lighting choice on this pivotal island.

I am opposed to the low quality overly bright and too tall lighting proposed for the island that is especially inappropriate for the historic section and the village-like Noland Park. I’m sure you have heard of the international Dark Sky Association – darksky.org/light-pollution/wildlife/ – who say:

“Birds that migrate or hunt at night navigate by moonlight and starlight. Artificial light can cause them to wander off course and toward the dangerous nighttime landscapes of cities. Every year millions of birds die colliding with needlessly illuminated buildings and towers. Migratory birds depend on cues from properly timed seasonal schedules. Artificial lights can cause them to migrate too early or too late and miss ideal climate conditions for nesting, foraging and other behaviors.”

“Keeping the light LOW (mounting the fixture as low as possible) and SHIELDED (fully shielding the light so bulbs and/or glowing lenses are not visible) cuts down on the amount of glare and light visible to the animal… Keeping it LONG wavelength (ambers and reds) actually makes the light that is visible seem dimmer to nocturnal animals that primarily use rod vision…. Changing to LOW, SHIELDED, and LONG wavelength lights also results in energy savings.”
Please consult with experts before approving any new lighting. As the island is open later, please do all you can to keep Governors Island safe for people and for wildlife – it’s crucial for our common future.
Sincerely,

We urge LPC NOT to approve the current proposal for replacement of existing lighting in Governors Island historic district.

The proposed “Moonlight + streetlight” design [image 1 below] for the Historic district in no way reflects the historic character of Nolan Park, Colonels row and adjacent areas and exceeds illumination needs. The proposed giant 35 ft high light poles and fixtures are intimidating, intrusive, and overly bright. A key benefit of our “country place in the city” is getting away from oppressive city lighting. The massive southern yellow pine poles are radically out of character for the historic district.[images 2 and 2a below]

We’ve seen the test lighting that is set up in Nolan Park turned on [image 3 below and HERE ]. It is not “natural” in effect, but extremely intrusive – particularly the ‘moonlight’ feature – even if they reduce from two to one moonlight fixtures as is being considered.

Except for image 3 below, the images in the TGI’s presentation under-represent the brightness of the proposed lighting. The images of the currently darkened Nolan Park area are a product of this year’s dramatically reduced-by-neglect lighting – perhaps to promote the proposal?

It’s possible to provide unobtrusive lighting to particularly unique places such as Governors Island. The Trust for Governors Island’s plan of using spread out massive light poles with wide reaching light is unsuitable for Governors Island. Also flooding the historic district’s parade ground area with light destroys one of the island’s favorite dramatic views (that of Fort Jay with nighttime Manhattan in the background).

Visit Brooklyn Bridge Park at night to see how obtrusive this proposed type of lighting is and how inappropriate it is for historic Governors Island.

Image 1 – the test installation of the proposed lighting for the GI historic district: 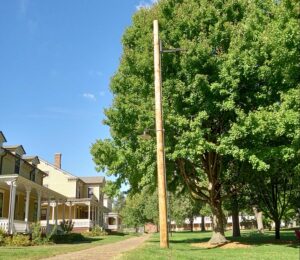 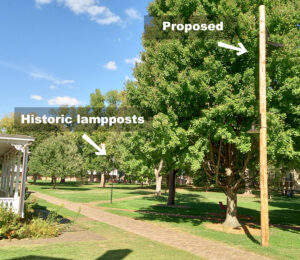 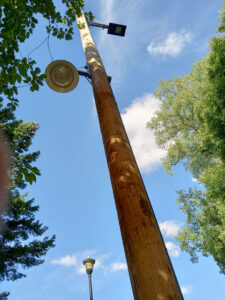 Image 3:
From the TGI presentation page 14:
It really is this bright. Imagine being on that porch. (Also see Proposed lighting demonstration Slideshow) 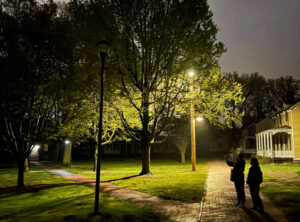 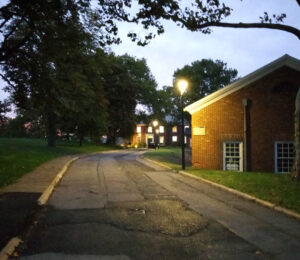 Also see the above info on the web:
https://govislandcoalition.org/upcoming/historic-district-lighting-lpc-hearing-oct-11th-testimony-needed