An Article 78 lawsuit has been filed against the the City’s egregious May 2021 rezoning on Governors Island.
The lawsuit was filed pro se on September 25, 2021 by long time lower Manhattan resident, Governors Island regular and co-founder of Metro Area Governors Island Coalition (M.A.G.I.C.) Roger Manning. Attorney Richard Lippes is retained. Lippes is also representing Voice of Gowanus and several other groups in the city and known for the historic Love Canal and Three Mile Island cases.

M.A.G.I.C. is publicizing the Lawsuit. The More Gardens! Fund is serving as the non-profit Fiscal Sponsor for the Trees Not Towers Governors Island Legal Fund. Please contribute at: https://govislandcoalition.org/tnt-governors-island-legal-fund

This case is particularly unique in that there is a Deed involved, unlike the numerous current NYC zoning and greenspace challenges imposed upon the pubic by the de Blasio administration (East River Park, Gowanus, Seaport, Two Bridges, Soho-Noho, Botanical gardens,Sunnyside, Elizabeth Street Garden, Blood Center, Inwood …).

Among other things, the lawsuit asserts that the rezoning is in violation of the Governors Island 2003 Deed in its attempt to alter the purpose of NYC’s uniquely welcoming spacious green urban refuge by paving the way for high-rise, high density private development. The Deed was established to “ensure the protection and preservation of the natural, cultural and historic qualities of Governors Island,” so that the Island would serve as “an educational and civic resource of special historic character and as a recreational and open space resource” – not provide a blank canvas for developers.

The rezoning approved on May 27, 2021 was not necessary to facilitate the City’s highly promoted climate solutions center concept. But the not legally required climate center concept was necessary to sell the unpopular high rise, high density largely commercial rezoning to the public. The rezoning went far beyond what was needed to expand permitted uses on the South Island and is not justified by by the City’s two key rationales: financial self-sufficiency for GI and year-round general public access (as evidenced by the announcement in October that the island is now year round to the public). Resulting development permitted by the upzoning won’t pay for the island’s needs – at least not until 2050 – according to the Trust for Governors Island’s own speculative projections which Community Board 1 labeled as insufficient. And now, while no new development has occurred since the zoning approval, $150 million in funds and year-round general pubic access have suddenly materialized casting doubt on the City’s transparency.

The issue here is what Governors Island will be – an irreplaceable one-of-a-kind green urban refuge, historic, arts, environmental, and educational space that essentially functions as a park – even in areas with buildings (NYC’s “country place in the city”)? OR another built-over privately occupied high-rise urban district with value-added landscaping? The Deed defines Governors Island as the former and the rezoning is in violation. 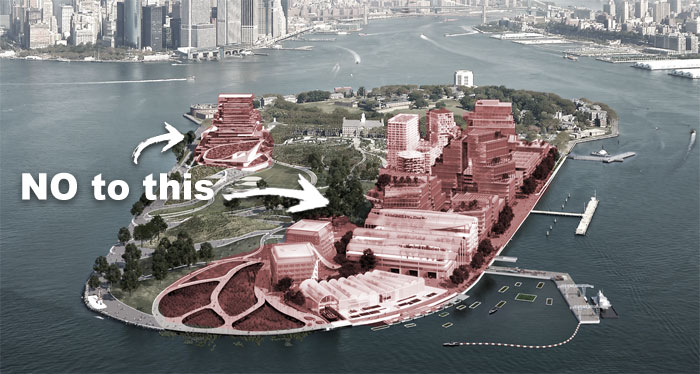 From the M.A.G.I.C. “Did You Know? – Fact Sheet For Developers”
https://govislandcoalition.org/did-you-know-fact-sheet-for-developers

– There is strong community opposition to the City/Trust’s current plan for Governors Island with its high rise, high density rezoning in a one-of-a-kind green public open space. Manhattan Community Board 1 (CB1), the Manhattan Borough president and several City Planning Commissioners registered strong objections as did the majority of New Yorkers attending hearings. None speaking in favor (mostly groups reliant on the Trust) addressed rezoning details but cheered on the Center for Climate Solutions concept – a key function of which has been to help sell the unpopular rezoning to the public. There is no requirement that it be built and there are already several institutions in NYC that focus on Climate Change research and solutions (and abundant alternative sites).

– As CB1 points out, the plan is nearly three times larger than the public’s original understanding of what it would be, “and the drastic increase in scale of development is unacceptable.”
See: https://govislandcoalition.org/documents/cb1-12-22-20-gi-resolution

– The planned development will displace the incredibly productive and educational GrowNYC urban farm, shove aside Earth Matter and Billion Oyster Project, and threaten over 50 mature trees in the eastern zone. The newly allowed heights (three times higher than “Outlook Hill”) and density are radically out of character with the historic and bucolic nature of the island.

– The development zones are in a flood zone and were inundated by Superstorm Sandy in 2012.

– There is no plan for fulfilling FDNY requirements nor for how to mitigate substantial traffic, pedestrian and freight congestion at access points in Brooklyn and Manhattan.

– The substantial increase in sewage combined with stormwater will be imposed on the ailing Red Hook water treatment plant, which also receives CSOs from the Gowanus district in Brooklyn (also facing massive development).

– The City/Trust has now gone public with the fact that they have been warehousing unused existing structures on the island in their offering them up as bonus space to developers. For years, the public has been told that renovating the buildings was financially unattractive to developers.

– That the only access to Governors Island will be via ferry is not practical for a large complex.
Innovative and sustainable energy sources are not part of the plan.

– High rise, high density development is not the best use of this unique public resource. Another approach: https://govislandcoalition.org/a-magic-plan

THE CITY COUNCIL’S ENACTMENT OF ZONING RESOLUTION TEXT AND MAP AMENDMENTS FOR GOVERNORS ISLAND THAT ARE IN VIOLATION OF COVENANTS IN THE NATIONAL TRUST DEED WAS ARBITRARY AND CAPRICIOUS.

18. The City Council of the City of New York’s May 27, 2021 approval of zoning amendments for Governors Island that are in direct violation of restrictive covenants in the Deed was arbitrary and capricious.

21. The approved zoning violates both the letter and the spirit of the Deed, which was intended to “ensure the protection and preservation of the natural, cultural and historic qualities of Governors Island,” Deed ¶ 2.1, so that the Island would serve as “an educational and civic resource of special historic character and as a recreational and open space resource.” Deed ¶ 2.3, and undermines the island’s primary benefit to everyday New Yorkers from all boroughs as a uniquely welcoming natural spacious urban refuge and area for and arts and education by:

22. ZR § 134-112 “Permitted uses in the open space subarea” is in blatant violation of the parkland restriction in the deed.

24. […] the current 40 acres of parkland area in the south island area has not been formally dedicated as parkland, but only zoned as “Open Space.” This is significant because zoning can be changed at any time (as we see with this enactment), whereas dedicated parkland cannot be alienated without an express enactment by the State Legislature.

25. Moreover, the zoning as enacted is radically inconsistent with these open spaces being parkland. […]

WHEREFORE, the Petitioner respectfully requests that this Court:
(1) enter a judgment annulling the zoning amendments pertaining to Governors Island approved by the City Council of the City of New York on May 27, 2021 as they directly violate the restrictive covenants governing that property;
(2) grant a permanent injunction prohibiting any construction in violation of the deed covenants.