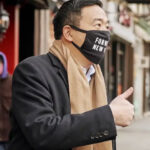 In his proposing a casino on GI, Mayoral candidate Andrew Yang highlights the real goal/motivation behind the city’s intended Governors Island rezoning – to “raise revenue for New York City’s recovery” – not to manage this unique parkland in a manner most beneficial to NYC residents.

NEW YORK — Mayoral candidate Andrew Yang has proposed a casino on Governors Island as a way to raise revenue for New York City’s recovery — a plan that would face immense obstacles if he were to pursue it as the city’s next leader.

“That casino would generate so much money it would be bananas,” Yang, a former entrepreneur who ran for president last year, said during a recent radio appearance on The Breakfast Club. “If the city could get that in place and harness some of that — that would be one of the engines of recovery.”

Governors Island is a 172-acre former military and Coast Guard facility in New York Harbor that is only accessible by ferry. It currently houses several restaurants and businesses, a large park and a National Monument in addition to swaths of open space.

Yang said during the radio appearance that the city needs to continually invent new ways to entice visitors to the five boroughs. A casino sited on the island would not only attract a lot of tourists, but would generate hundreds of millions of dollars a year. In theory, revenue of that scale could partially offset the cost of his $1 billion basic income plan, which would transfer direct payments to a half-million of the city’s poorest residents.

“It’s going to be in an environment right now that is essentially unused,” Yang said.

There would be a few issues with such a proposal: For one, casinos are banned on the island through a 2003 deed restriction that was hashed out with the federal government. In addition, the unused portions of the island are unlikely to remain that way for long.

The Governors Island Trust is in the middle of a rezoning process to bring millions of square feet of development to the island, in part to help pay for its operations.

“The current plans for Governors Island are focused on developing a mixed-use campus that will provide educational, commercial and hospitality offerings centered on the theme of climate change and sustainability,” said Alicia Glen, chair of the trust’s board and former deputy mayor. “In addition to the fact that it is prohibited by the deed, there is no scenario under which a casino would fit into the current or future plans for Governors Island.”

Yang’s camp said that the mayoral hopeful was throwing out an idea, rather than a fully baked proposal.

“Andrew believes in constantly discussing new and creative ideas to help rebuild our city — but he also believes that any major development project must be community led,” Yang spokesperson Chris Coffey said in a statement. “That’s why this idea, like many others, would not advance unless stakeholders believed in the process, which is far from even beginning.”

Casino development is regulated by the state and in recent years has focused on upstate regions, though Albany leaders had been mulling the addition of downstate licenses in years’ past.