Towards Open House New York’s goal, “to deepen public awareness and understanding of notable developments on the boards across the five boroughs”, this email aims to supplement information presented by the Trust for Governors Island.

There is currently an Article 78 lawsuit filed against the May 2021 Governors Island rezoning that highlights serious environmental shortcomings and Deed violations. The rezoning was not necessary to bring in a climate solutions center, but the not legally required climate center concept was necessary to sell the high rise, high density largely commercial rezoning to the public.

The Deed defines Governors Island as a place with “natural, cultural and historic qualities” and “an educational and civic resource of special historic character and as a recreational and open space resource.” The climate center marketing paved the way for a rezoning that undermines the island’s primary benefit to everyday New Yorkers as a uniquely welcoming natural spacious historic urban refuge and area for arts, recreation, education, and environmental work by:

(b) Creating parking for 200 vehicles on a traffic free island.

(c) Allowing displacement of a thriving urban farm and other environmental projects.

(e) Allowing building heights rising to 3 times the height of and blocking views from the south island’s 70 ft “Outlook Hill.”

(f) Including no provisions regarding architectural style.

– The claim of an “estimated 7,000 direct jobs and nearly $1 billion in impact for New York City” is not supported by any realistic financial analysis. In fact The Trust dropped the financial portion of their presentation during ULURP public hearings after the public and numerous public officials pointed out it’s fallacies. Also, the Governors Island Deed requires that any income generated on Governors Island, “shall be applied solely” to the operation of Governors Island. Governors Island’s purpose is not to serve as a cash cow for NYC.

– There has been strong community opposition to the City/Trust’s current plan for Governors Island with its high rise, high density rezoning in a one-of-a-kind green public open space. Manhattan Community Board 1 (CB1), the Manhattan Borough president and several City Planning Commissioners registered strong objections as did the majority of New Yorkers attending hearings. None speaking in favor (mostly groups reliant on the good will of the Trust) addressed rezoning details but cheered on the Center for Climate Solutions concept – a key function of which has been to help sell the unpopular rezoning to the public. There is no requirement that it be built and there are already several institutions in NYC that focus on Climate Change research and solutions (and abundant alternative sites).

– As CB1 points out, the plan is nearly three times larger than the public’s original understanding of what it would be, “and the drastic increase in scale of development is unacceptable.”
See: https://govislandcoalition.org/documents/cb1-12-22-20-gi-resolution

– The planned development will displace the incredibly productive and educational GrowNYC urban farm, shove aside Earth Matter and Billion Oyster Project, and threaten over 50 mature trees in the eastern zone. The newly allowed heights (three times higher than “Outlook Hill”) and density are radically out of character with the historic and bucolic nature of the island.

– The development zones are in a flood zone and were inundated by Superstorm Sandy in 2012.

– The substantial increase in waste water will be imposed on the ailing Red Hook water treatment plant, which also receives waste from the Gowanus district in Brooklyn (also facing massive development).

– The City/Trust has now gone public with the fact that they have been warehousing unused existing structures on the island in their offering them up as bonus space to developers. For years, the public has been told that renovating the buildings was financially unattractive to developers.

– Innovative and sustainable energy sources are not part of the plan.

– High rise, high density development is not the best use of this unique public resource. Another approach: https://govislandcoalition.org/a-magic-plan 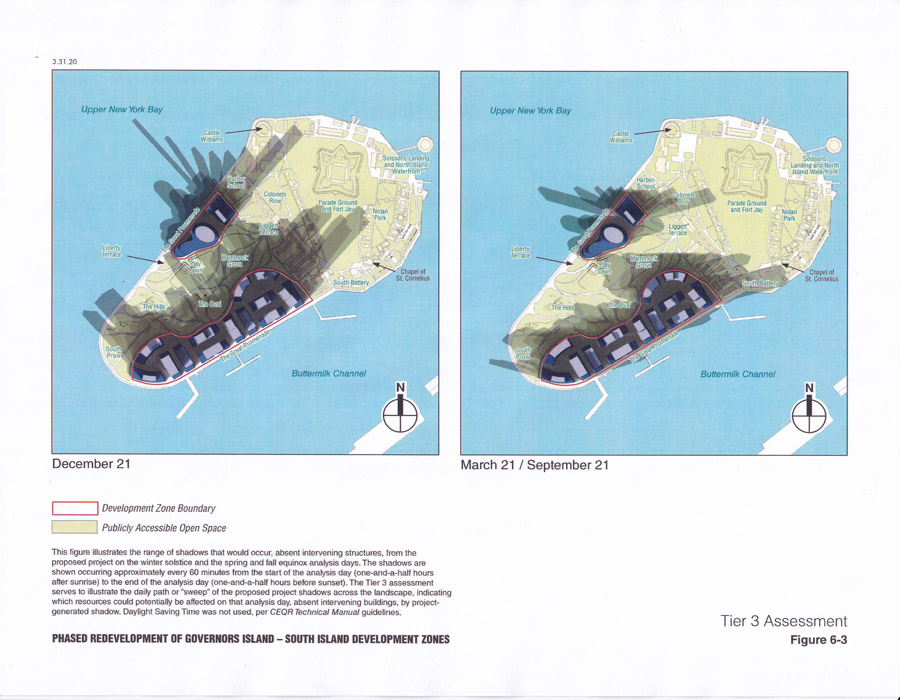