– The Briefings left out the main question – should there even be such a project on GI? Why is large private development on public land the only option presented for the future of GI?

– Only a vastly stripped down “phase one” portion of each of the 3 proposals was presented. This gave some the false impression that the development plan has been scaled back. The full proposals and phases will likely be very concerning with regard to out-of-scale privatization on GI.

– For at least “phase one”, only around 25% of the designated 33 acre development zone is being used for the climate center (see map below). We were told that the other 75% will involve future RFPs. All of these are allowed to be large, non-academic, and commercial.

– There was strong room disapproval with proposal #3’s 22 story tower – twice the height of Liggett Hall and 3 times that of Outlook Hill.

– There was nothing in the presentations regarding the 200 parking spaces allowed by the 2021 rezoning. When asked, the Trust replied that it was for maintenance vehicles – private vehicles aren’t allowed. In reality a considerable number of private vehicles are already on and off GI daily.

– The Trust stated that the development zones are fenced off to the public so there’s no loss of public space. But they neglected to mention the urban farm and the projects currently located there – and actually it’s all public space.

– The Trust claimed that there will be no encroachment on the “park.” But the “Open Space Subarea” is not legally designated parkland and the 2021 rezoning allows structures to cover 20%.

– The large portion of the session centered around educational and research curriculum served mainly as marketing for the climate center concept and to divert attention from the flaws in the Trust’s plan including the areas of revenue, over-development, potential multiple hotels etc.

– How serious can the Trust be about climate solutions with their requirement of the use of natural gas in new buildings? National Grid, known for fracked gas, supplies GI. [C 210127 ZMM Governors Island Text Amendment March 17, 2021, Appendix I, p.70 – 72]

When Governors Island was turned over to NYC in 2003, everyone worked together to prevent it falling into the hands of private developers so that it would always be a public place. The resulting 2003 Deed establishes that the Island would serve as “an educational and civic resource of special historic character and as a recreational and open space resource” and ensure “the protection and preservation of the natural, cultural and historic qualities of Governors Island.”

The intent did NOT include:
– Essentially privatizing the island by turning it into a research campus
– Fueling the city’s economic engine. “One billion dollars and 7,000 Jobs”?
Where is the data behind that? The Deed requires that any income generated on Governors Island, “shall be applied solely” to the operation of Governors Island.

The 2021 upzoning wasn’t necessary to bring in a “Center for Climate Solutions”, but the Center was needed to sell the upzoning.

Simply extending the special zoning applied to the Governors Island historic district in 2013 would have been more than adequate. The actual intention here is to provide an “anchor tenant” with which to attract major developers.

Note the excessive building heights provided by the 2021 upzoning. It:
– Allows 225ft-plus building heights. Three times the height of the island’s Overlook Hill and tower at Liggett Hall, this high density development will overshadow the open green spaces, mature trees and its unique and historic low rise buildings, as well as the island’s renown high school.
– Creates parking for 200 vehicles on a traffic free island.
– Invites commercial cacophony into a vulnerable floodplain.

What is the best use of Governors Island?

There is a pending Article 78 lawsuit with 26 petitioners and a community statement signed by over 70 organizations from across the city. While there is room for a Climate Center in some form, it should not be at the expense of present and future generations who will need this incredibly unique urban refuge, free of high-rise high density construction and traffic.

Children experience a freedom unlike anywhere else in the city. New Yorkers of all income levels from all boroughs can afford a break from the stress of the city. It’s a refuge for wildlife as well.

Trees, not towers! See the “Alternative South Island Visualization” on the M.A.G.I.C. website and help preserve our safe, pastoral experience for NYC children and their families with environmental, educational, and arts space, on this verdant, historic island.

Protect Our Country Place In The City 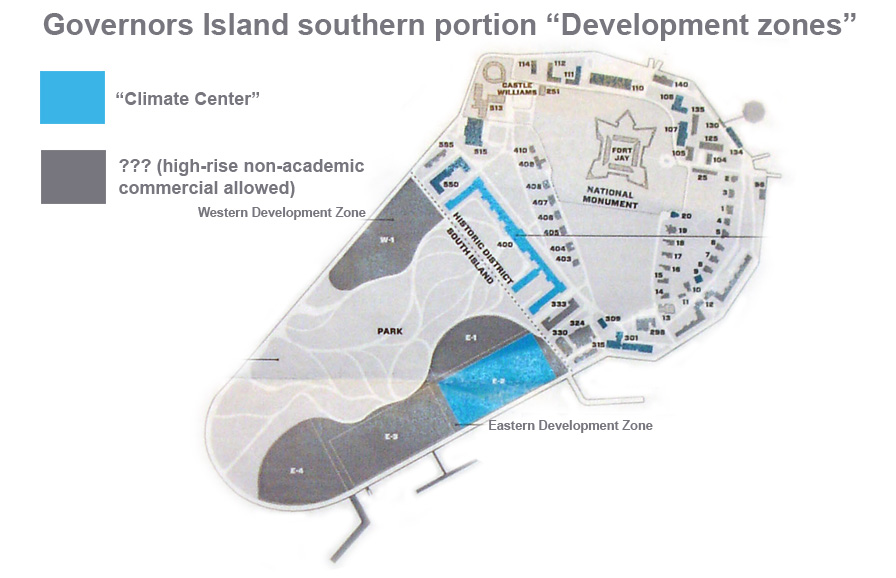